Ben Lawers (Gaelic: Beinn Labhair) is one of the highest mountains in the southern part of the Scottish Highlands. It lies to the north side of Loch Tay, and is the highest point of a long ridge that includes seven Munros. Ben Lawers was long thought to be over 4,000 feet (1,219.2 m) in height; accurate measurement in the 1870s showed it to be some 17 feet (5.2 m) short of this figure. In 1878, a group of twenty men spent a day building a large cairn in the hope of bringing the summit above the "magic" figure. The cairn is no longer there; in any case the Ordnance Survey ignored it as an artificial structure that was not truly part of the hill. 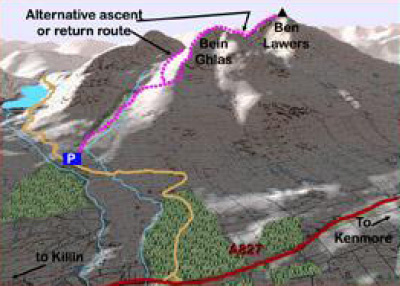 Warning - Although a relatively simple though strenuous walk in good weather, this becomesdifficult and hazardous in winter conditions with icy surfaces and severe drifting in gale force winds. Time for trip may be doubled! In poor visibility any approach other
than from the car park can be hard to navigate

Ben Lawers is not really in the Trossachs but it's a great climb and you get a head start from the carpark at 1400 ft.

From Stirling take the A84 via Callander, Strathyre and Lochearnhead then after Glen Ogle, turn right at Lix Toll through Killin to the north Loch Tay road. 3 or 4 miles east of Killin turn left onto the Ben Lawers road and up to the nature reserve car park. Throughout this walk you may see rare Alpine flowers in season. They are protected species and must not be damaged. The walk is carpeted with 'Alpine Lady's Mantle' and scented 'Wild Mountain Thyme' made famous by the song.

The Route
From the Ben Lawers carpark walk up the duckboarded path over the wet ground in a northerly direction towards the mountain. Once off the duckboards, follow the Edramucky burn northwards up the gully for about half a mile until the track turns suddenly east (sign posted to Ben Lawers) and crosses the burn. Follow the track with the burn now on your
left, through the game gate then ascend the shoulder and on up to the top of Bein Ghlas.
Excellent views here to Ben Lawers with an Stuc and Meal Garbh hiding behind.

Continue north eastwards from Bein Ghlas and descend the ridge to the col at the foot of the final ascent to Ben Lawers.

In poor visibility keep away from the steep cliffs to your right. The climb becomes steep and rocky, more scrambling than walking where eroded, for 600 feet to the Lawers summit.

Beware steep slopes to the west at the top – it’s a long slide down and a longer climb back up!

From the summit on a clear day you may see the east coast at the Firth of Tay as well as the Firth of Clyde far off to the south west. Ben More with it's ridge to Stobinion are obvious to the west. Lochan nan Chat may be seen below below Meal Garbh and An Stuc to the north east of the summit. The Tarmachan range lies to the west and Glen Lyon to the
north.

Take a short walk along the ridge to the south east (toward loch Tay) to see a fantastic lunar landscape with a 'crater' containing the remains of a Victorian mapping expedition base. The remains are in the form of some dry stone building ruins sheltered by the craggy sides of the 'crater'. Mind your footing here as there are opportunities to damage yourself
by falling into the 'crater'. The crater often harbours snow well into summer.

Retrace your steps to the summit then back down to the col and look for the track leading down to the north as you come off the steep descent. Follow this track to the right (often treacherously icy with frozen meltwater in winter) down the north side of Beinn Ghlas then into the bealach to follow the burn southwards and re-join the ascent track near the
game gate.

Escape
This last track to the north side from the beallach between Lawers and Bein Ghlas can provide a valuable escape route to lower levels if on the ascent the weather deteriorates unexpectedly. Descend to the car park by the track.

Book Online & get up to 20% discount on your stay at Ben Lawers Hotel!